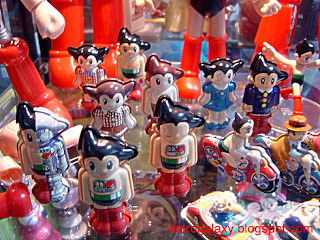 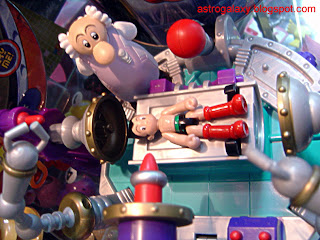 Who's Who in the Astro Boy Anime :
Astro Boy / Tetsuwan Atom
Astro has a sense of morality, ability to tell what's right and wrong. Astro is a super powered robot, with seven secret super powers and designed to look exactly like Toby (son of Dr. Boynton). Dr. Boyton treated Astro as a replacement for his son who died in a car accident. But Astro Boy was clumsy and inability to control his strength lead to separation with Dr. Boyton. Astro was later forced to work in Hameggs' Robot Circus but was later rescue by Dr. Elefun.

Doctor Boyton / Dr. Umataro Tenma
Dr. Boynton worked on creating a robot that would act and behave like a human. Working to obtain his goal, Dr. Boyton neglected his son Toby, forgetting his promise to take Toby to the amusement park. Toby decides to go on his own and crashes the robot car. Toby was killed in the accident.
Dr. Boyton created Astroboy and raised him as his own child. This causes him to lose his position as the Ministry of Science.
He continues to work on the boy robot but Astro inability to control his own strength and unable to grow begins to anger Dr. Boynton, and while on a cruise Dr. Boynton disowned Astro.

Daddy Walrus / Albert Duncan
Daddy Walrus is Astro's teacher, real name Albert Duncan. Also a good friend of Dr. Elefun and fights for robot rights.
He is a trained martial artist in Judo. Cares for Astro and Uran and willingly risk his life for them.

Uran
Uran is Astro's little sister built by Dr. Elefun as a gift to Astro on New Year's Day.
She is lively, mischevious and quite a tomboy.
Uran is also capable of experiencing human emotions.

Jump
Jump used to be Toby's dog. After Toby death, Jump lives with Astro and his family.

Livian
Livian is Atlas' companion but she is compassionate by nature.
Livian has alerted Astro many times of Atlas plans.
She is also the one to discover that Astro and Atlas are brothers (built using the same blueprint).

Skunk
Skunk is an escaped criminal under the most wanted list in Japan.
Skunk wanted to destroy Astro for having foiling his evil schemes.

Inspector Gumshoe / Inspector Tawashi
Inspector Gumshoe is head of the Tokyo Police Department. Usually arresting Astro.
Due to his opposition to Tokyo's robotic population, Gumshoe & Dr Elefun often engages in arguments.
Gumshoe finally accept Astro's courage and abilities, even asking for his assistance in some cases.

I like AstroBoy when I was a kid, and now I enjoyed watching the latest movie with my son.